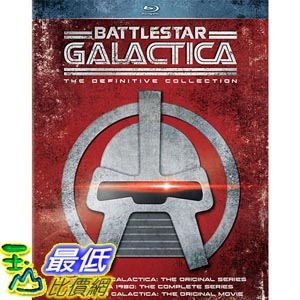 The ultimate collection for the classic series that launched one of the most beloved sci-fi franchises of all time, enjoy Battlestar Galactica in both its original television format and in widescreen format for the first time – all in high-definition! Battlestar Galactica: The Original Series: Hopeful for lasting peace following centuries of intense warfare, the Twelve Colonies gather to sign a treaty with their dreaded enemies, the Cylons. But after an act of treachery on the eve of the ceremony, the Cylons launch a devastating surprise attack, destroying the Colonies' home planets and most of their military strength. A lone flagship battlestar, the Galactica, remains to aid the surviving colonists on their epic journey for a new home to a far-off legendary planet—Earth. Galactica 1980: The Complete Series: 30 years after the events of Battlestar Galactica, the original crew finally makes the long-anticipated descent to Earth. With time running out and the Cylons closing in on their trail, Commander Adama and the Galactica must work harder than ever before to help Earth create the technology necessary for battle. Battlestar Galactica: The Original Movie: The original movie that started it all, this theatrical version of the pilot episode includes several alternate scenes different from the televised version.