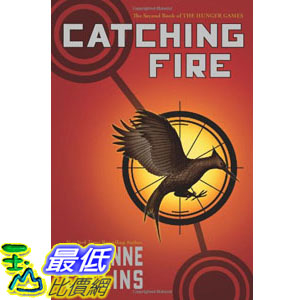 Against all odds, Katniss Everdeen has won the annual Hunger Games with fellow district tribute Peeta Mellark. But it was a victory won by defiance of the Capitol and their harsh rules. Katniss and Peeta should be happy. After all, they have just won for themselves and their families a life of safety and plenty. But there are rumors of rebellion among the subjects, and Katniss and Peeta, to their horror, are the faces of that rebellion. The Capitol is angry. The Capitol wants revenge.

From School Library Journal
Grade 7 Up—In the second title (2009) in Suzanne Collins's planned trilogy, set in the dystopic nation of Panem, Katniss has survived The Hunger Games (2008, both Scholastic), a fight to the death, and learns that she is now considered a danger to the Capital because she has become a symbol of rebellion. President Snow lets her know he is out to "get her" and those she loves. After she and Peeta complete a victory tour to all of the districts and witness firsthand the unrest and force used to squelch it, she learns that in this year of the Quarter Quell (a special version of The Games), former champions are to be the competitors once again. She enters this game with one goal in mind—to keep Peeta alive. The only problem is that he has the same goal. Suspense abounds as, along with Katniss, listeners experience the games once again, with new secrets and questions about the "true" loyalty of her supposed allies. Katniss's feelings about Peeta and Gale continue to confuse her, sometimes clouding her thinking. While Carolyn McCormick's voice sounds older than one might expect for Katniss, she perfectly captures all of her moods. She is very versatile in voicing Peeta's earnestness, Gale's quiet strength, Haymitch's sarcasm, and the feelings of all the lesser characters. The ending is a cliffhanger, and fans of the series will eagerly await the next installment.—Edie Ching, Washington Latin Public Charter School, DC
Copyright © Reed Business Information, a division of Reed Elsevier Inc. All rights reserved. --This text refers to the Audio CD edition.
From Bookmarks Magazine
Reviewers were happy to report that the Hunger Games trilogy is alive and well, and all looked forward to the third book in the series after this one's stunning conclusion. But they disagreed over whether Catching Fire was as good as the original book Hunger Games or should be viewed as somewhat of a "sophomore slump." Several critics who remained unconvinced by Katniss's romantic dilemma made unfavorable comparisons to the human-vampire-werewolf love triangle in Stephenie Meyer's Twilight series. But most reviewers felt that Catching Fire was still a thrill because Collins replicated her initial success at balancing action, violence, and heroism in a way that will enthrall young readers without giving them (too many) nightmares. --This text refers to the Hardcover edition.