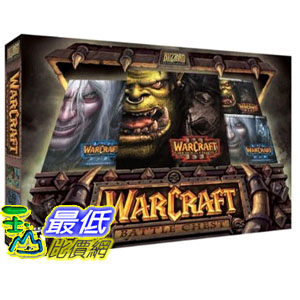 PS.圖片僅供參考,商品以實物為准!
Play in the market, learn mathematics and make friends in Hello Kitty Sweet Little Shops!
5 curricular mini games and 4 activities reinforce the learning; Visit all of the shops in one theme, complete up to 10 quests and earn friendship points to advance!
In the original Warcraft III, the Orcs have formed a deadly army called the Burning Legion. They threaten all of Azeroth -- use this new danger to form a power base for your nation
Side with the Orcs, Humans, Undead or Night Elves and fight for dominance in a fully-interactive 3D world
Create legenedary heroes that will complete quests and acquire items that advance your army
In Warcraft III - The Frozen Throne, a new threat called the Lich King has come to Azeroth. Take up arms and rush to battle yet one more time!
Expansion features all-new units, player-built shops & buildings, and powerful new magic abilities
Product Details
ASIN: B00009ECGK
Product Dimensions: 7.8 x 10.5 x 1.3 inches ; 1.9 pounds
Media: Video Game
Release Date: September 19, 2003
Product Description
This epic pack includes 2002 Game of the Year, Warcraft III: The Reign of Chaos, Warcraft III Expansion: The Frozen Throne and official strategy guides for both games.
From the Manufacturer
The Warcraft III Battle Chest is the ultimate collection of the best-selling Blizzard strategy games. This set includes 2002 Game of the Year Warcraft III: The Reign of Chaos, as well as the recently released and critically acclaimed follow-up - Warcraft III Expansion: The Frozen Throne. In addition to all these hours of epic adventure in the world of Azeroth, and limitless online fun on the Battle.net gaming site, the Battle Chest also contains strategy guides from Brady Games for both titles to help players dominate the battlefield. This collection is valued at over $75.00 sold separately, and is perfect for entering the epic war between the races of Azeroth and the demonic Burning Legion.