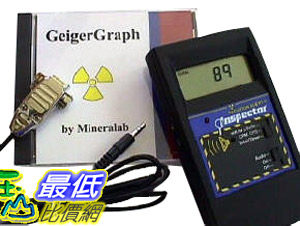 Our selection of Geiger Counters, namely the Inspector, the Inspector EXP, the Radalert, and the Monitor 4, come with an optional Software accessory, including a data cable to interface to a computer or data logger, along with our GeigerGraph software for a Windows PC. Each pulse or count from the Geiger Counter is transmitted through the data cable, and via the software, displays and graphs those counts per minute in terms of the Current reading, an Average, and Minimum and Maximum counts per minute (CPM) over the test period.

The GeigerGraph software is especially useful for monitoring environmental radiation, alerting you to any elevated levels relative to your typical background count. The software issues an audible and visual alert whenever the CPM exceed a user set desired level. For example, the picture below shows the program first monitoring background radiation, but then halfway through the test period, issuing a visual alert because some radioactive "event" caused the radiation counts to exceed the user set Alert Level of 100 CPM.