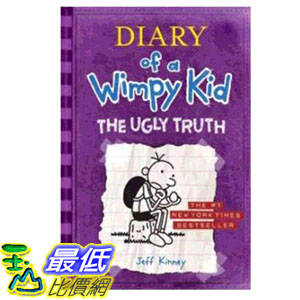 Greg Heffley has always been in a hurry to grow up. But is getting older really all it’s cracked up to be?
Greg suddenly finds himself dealing with the pressures of boy-girl parties, increased responsibilities, and even the awkward changes that come with getting older—all without his best friend, Rowley, at his side. Can Greg make it through on his own? Or will he have to face the “ugly truth”?
Editorial Reviews
From Booklist
In his latest diary, the fifth in the mega-best-selling Wimpy Kid series, Greg Heffley, star of page and screen, proves indisputably that “when it comes right down to it, middle-schoolers are just a bunch of wild animals.” It’s a jungle out there for sure, and the key components are farting, pimples, family gatherings, headgear, fatherly homework help, lousy aim in the bathroom, and, of course, girls. Greg’s main focus as the school year gets under way is replacing his best friend, Rowley, with whom he had a falling out over the summer. Although he has not reached full-blown puberty quite yet, Greg feels as if he’s hit his childhood “expiration date,” and when you’re no longer a cute kid, nothing is as easy as it used to be. Once again, Kinney remains unerringly attuned to the tween psyche as he packs in rapid-fire experiences in words and cartoons that are bust-a-gut funny, beg-to-stay-home-from-school mortifying, and completely authentic in all their ugly truths. Grades 5-8. --Andrew Medlar
About the Author
Jeff Kinney is a #1 New York Times bestselling author and five-time Nickelodeon Kids’ Choice Award winner for Favorite Book. Jeff has been named one of Time magazine’s 100 Most Influential People in the World. He is also the creator of Poptropica, which was named one of Time magazine’s 50 Best Websites. He spent his childhood in the Washington, D.C., area and moved to New England in 1995. Jeff lives with his wife and two sons in Plainville, Massachusetts, where he owns a bookstore, An Unlikely Story.
基本信息
Age Range: 8 - 12 歲
適用年級: 3 - 7
1000L (What's this?)
系列: Diary of a Wimpy Kid (圖書 5)
Hardcover: 224頁
出版社: Harry N. Abrams; 1st Edition (2010年11月9日)
語種： English
ISBN-10: 9780810984912
ISBN-13: 978-0810984912
ASIN: 0810984911
產品尺寸及重量: 14 x 2.2 x 21 cm
發貨重量: 13.6 ounces