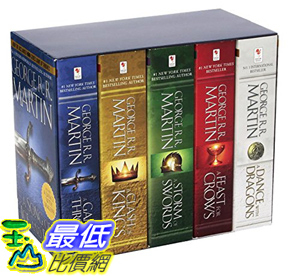 HBO's hit series A GAME OF THRONES is based on George R R Martin's internationally bestselling series A SONG OF ICE AND FIRE, the greatest fantasy epic of the modern age.George R.R. Martin's A Song of Ice and Fire series has set the benchmark for contemporary epic fantasy. Labelled by Time magazine as one of the top 100 most influential people in the world, Martin has conjured a world as complex and vibrant as that of J.R.R. Tolkien, populated by a huge cast of fascinating, complex characters, and boasting a history that stretches back twelve thousand years.Three great storylines weave through the books, charting the civil war for control of the Seven Kingdoms; the defence of the towering Wall of ice in the uttermost north against the unearthly threat of the Others; and across the

Editorial Reviews
Review
`When times are tough, there is no better distraction than these magical tales' Guardian`Martin has not only raised the bar for writers of epic fantasy but pushed and stretched the boundaries of the novel itself' The Times`Fantasy fiction's equivalent to THE WIRE' Telegraph`Complex storylines, fascinating characters, great dialogue, perfect pacing, and the willingness to kill off even his major characters' LA Times`Mr Martin is a literary dervish, bursting with the wild vision of the very best tale tellers' New York Times --This text refers to an out of print or unavailable edition of this title.

About the Author
George R.R. Martin is the author of fourteen novels, including five volumes of A SONG OF ICE AND FIRE, several collections of short stories and numerous screen plays for television drama and feature films. He lives in Santa Fe, New Mexico. --This text refers to an out of print or unavailable edition of this title.