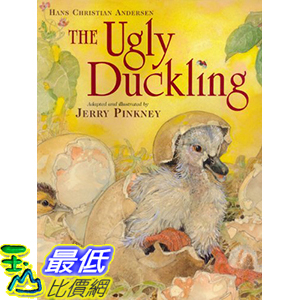 For over one hundred years The Ugly Duckling has been a childhood favorite, and Jerry Pinkney's spectacular adaptation brings it triumphantly to new generations of readers.

With keen emotion and fresh vision, the acclaimed artist captures the essence of the tale's timeless appeal: The journey of the awkward little bird—marching bravely through hecklers, hunters, and cruel seasons—is an unforgettable survival story; this blooming into a graceful swan is a reminder of the patience often necessary to discover true happiness. Splendid watercolors set in the lush countryside bring the drama to life in this hardcover picture book.

Three-time Caldecott Honor artist and four-time winner of the Coretta Scott King Award, Jerry Pinkney doesn't disappoint with this lovely, old-fashioned, richly textured watercolor adaptation of Hans Christian Andersen's The Ugly Duckling. The mother duck knew from the very beginning that one of her babies would be different from the rest... the sixth egg was large and oddly shaped. When it finally hatches that summer, she thinks the "monstrous big duckling" must be a turkey chick! Other ducks are appalled by the ugly duckling, and he is chased, pecked, and kicked aside. When he can't stand it anymore, he runs away from the pond, eventually taking refuge in the warm cottage of an old woman with a cat and a hen. Missing the delicious feeling of the water too much to stay, however, he heads out again into the wide, increasingly cold autumn world.

One day, he heard a sound of whirring wings, and up in the air he saw a flock of birds flying high. They were as bright as the snow that had fallen during the night, and their long necks were stretched southward. Oh, if only he could go with them! But what sort of companion could he be to those beautiful beings?"
At last, after a hard, cold winter--and plenty of the kind of adventures no one really wants to have--the duckling sees the same flock of birds he'd seen in the sky so many months ago. He decides he will follow them, somewhat dramatically preferring to be killed by them rather than suffer any more "cold and hunger and cruelty." Much to his surprise, they welcome him! And when he looks for his dull, awkward reflection in the water, he sees a beautiful swan instead. Children who feel ostracized, even for the tiniest of differences, may shed a few sympathetic tears for the ugly duckling. And no doubt, it was Andersen's wish to give them the hope of one day finding their own peaceful place. (Ages 3 to 9) --Karin Snelson
From Publishers Weekly
Pinkney's (Rikki-Tikki-Tavi) supple, exquisitely detailed watercolors provide a handsome foil to his graceful adaptation of the Hans Christian Andersen classic. This "duckling" is teased unmercifully by his apparent siblings but loved by the mother duck: "He may not be quite as handsome as the others," she says, "but... I am sure he will make his way in the world as well as anybody." Eventually he runs away, and as the seasons turn, the fledgling has a series of adventures, from a close encounter with a hunting dog to getting trapped in ice. All the while he is growing, transforming, and in the triumphant ending, he finds peace and happiness when his real identity is revealed to himself and to readers. Pinkney's artwork is a swan song to the beauty of the pastoral, and his lush images flow across the pages in sweeping vistas and meticulous close-ups. Whether depicting the subtle patterns and colors of a duck's feathers, the murky twilight of a freshwater pond or the contrast of red berries against dried grasses etched with snow, Pinkney's keenly observed watercolors honor nature in all its splendor. A flawlessly nuanced performance by a consummate craftsman. Ages 3-up.
Copyright 1999 Reed Business Information, Inc.
Age Range: 4 - 8 years
Grade Level: Kindergarten - 3
Lexile Measure: AD650L (What's this?)
Series: Caldecott Honor Book
Hardcover: 40 pages
Publisher: Morrow Junior Books; 1st edition (March 24, 1999)
Language: English
ISBN-10: 068815932X
ISBN-13: 978-0688159320
Product Dimensions: 9.2 x 0.4 x 11 inches
Shipping Weight: 1 pounds