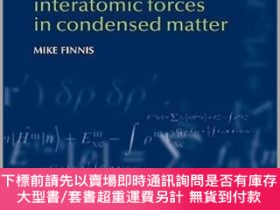 代購商品
There is a continuing growth of interest in the computer simulation of materials at the atomic scale, using a variety of academic and commercial computer programs. In all such programs there is some physical model of the inter-atomic forces, which may be based on something as simple as a pair interaction, such as the Lennard-Jones model, or as complex as a self-consistent, all-electron solution of the quantum mechanical problem. For a student or researcher, the basis of such models is often shrouded in mystery. It is usually unclear how well founded they are, since it is hard to find a discussion of the physical assumptions that have been made in their construction. The lack of clear understanding of the scope and limitations of a given model may lead to its innocent misuse, resulting either in unfair criticism of the model or in the dissemination of nonsensical results. In the present book, models of inter-atomic forces are derived from a common physical basis, namely the density functional theory. The interested reader will be able to follow the detailed derivation of pairwise potentials in simple metals, tight-binding models from the simplest to the most sophisticated (self-consistent) kind, and various ionic models. The book is self-contained, requiring no more background than provided by an undergraduate quantum mechanics course. It aims to furnish the reader with a critical appreciation of the broad range of models in current use, and to provide the tools for understanding other variants that are described in the literature. Some of the material is new, and some pointers are given to possible future avenues of model development.