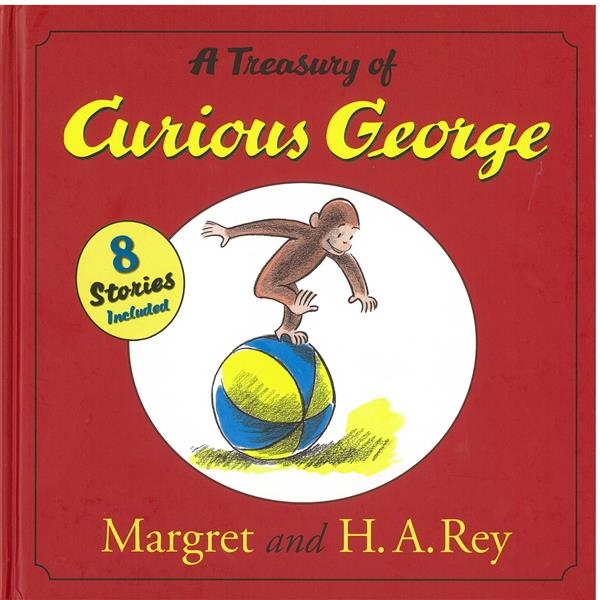 內容簡介：
“He was a good little monkey and always very curious.” This is how H. A. Rey and his wife, Margret, first introduced their now beloved troublemaker-hero to young readers in 1941. In this hefty 192-page hardcover treasury, Curious George fans will find eight stories based on the popular primate, painted in Rey’s original watercolor and charcoal style: Curious George Takes a Train (2002), Curious George Visits a Toy Store (2002), Curious George and the Dump Truck (1999), Curious George and the Birthday Surprise (2003), Curious George Goes Camping (1999), Curious George Goes to a Costume Party (2001), Curious George Visits the Library (2003), and Curious George in the Big City (2001). A wonderful collection for your own mischievous monkey.
For more monkey fun, investigate www.curiousgeorge.com and discover all the latest on Curious George books, promotions, games, activities, and more!
作者簡介：
The Reys were born in Hamburg, Germany. Hans Augusto Rey (1898-1977) met his wife-to-be, Margret (1906-1996), at a party in her father's home in Germany; when he first caught a glimpse of her, she was sliding down the banister. In their twenties and thirties they lived in Paris and in Rio de Janeiro, where Hans sold bathtubs in villages along the Amazon River. Eventually Cambridge, Massachusetts, became the Reys' home and community. Throughout their lives the Reys created many lively books together, including SPOTTY, PRETZEL, and lift-the-flap books such as HOW DO YOU GET THERE? The manuscript of the first Curious George books was one of the few items the Reys carried with them on their bicycles when they escaped from Paris in 1940. Eventually, they made their way to the United States, and CURIOUS GEORGE was published in 1941. Their incorrigible little monkey has become an American icon, selling millions of books and capturing the hearts of readers everywhere. CURIOUS GEORGE has been published in many languages, including French, German, Japanese, Afrikaans, and Norwegian. Additional Curious George books followed, as well as such other favorites as CECILY G. AND THE NINE MONKEYS and FIND THE CONSTELLATIONS.