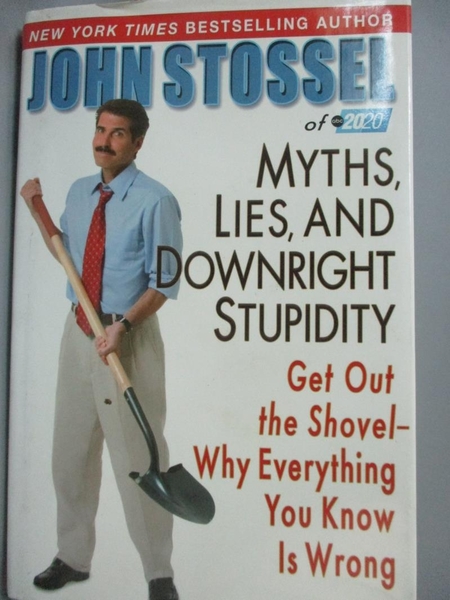 [內容簡介] (本項為出版商制式文字, 不論下文註明有無附件, 仍以本拍賣商品標題為準, 標題未註明有附件者一律均無)
Consumer advocate, investigative reporter, and bestselling author John Stossel is back with a new book based on his top-rated 20/20 segment, which debunks popularly reported misconceptions

America favorite investigative reporter, John Stossel, tackles our favorite myths in his characteristic style and challenges us to look at life differently.

Myths and Misconceptions covered in the book include:

Is the media unbiased?

Are our schools helping or hurting our kids?

Do singles have a better sex life than married people?

Do we have less free time than we used to?

Is outsourcing bad for American workers?

The world is too crowded.

John Stossel takes on these and many more misconceptions, misunderstandings, and plain old stupidity in this collection that will offer much to love for Give Me a Break fans, and show everyone why conventional wisdom -- economic, political, or social -- is often wrong.

John Stossel has been reporting for 20/20 since 1981. Since then, he has received 19 Emmy awards, and been honored five times for excellence in consumer reporting by the National Press Club. In addition to his longer indepth reports for 20/20, Stossel is featured in a weekly segment called "Give Me a Break." His book Give Me a Break was a national bestseller. He also hosts ABC John Stossel Specials report for ABC radio and

ABCNews.com. A graduate of Princeton University, Stossel lives in New York City with his wife and two children.)