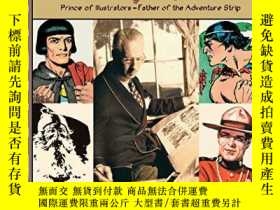 代購商品
A comprehensive biography of Hal Foster, in which author Brian M. Kane examines the 70-year career of one of the greatest illustrators of the 20th century. "Superman" was modelled after Foster's drawings of Tarzan, Flash Gordon's Alex Raymond borrowed compositions from "Prince Valiant", and many artists, including the famous contemporary Western painter James Bama, count Foster among their greatest influences. Born in Halifax, Nova Scotia in 1892 of a seafaring family, Hal naturally took to the sea. At the age of eight he paddled a 12-foot plank across Halifax Harbor to the consternation of large Cunard liners. In his youth he was a catalogue artist, a trapper, a professional boxer, a gold prospector, and a hunter-guide in the uncharted forests of Canada. In 1921 with a wife and two children to support he peddled his one-speed bicycle 1000 miles across dirt and gravel roads from Winnipeg to Chicago to attend the Art Institute and later find permanent employment. The young illustrator's work appeared on the covers of "Popular Mechanics" and in hundreds of magazines for clients such as "Northwest Paper", "Jekle Margarine", "Southern Pacific Railroad" and "Illinois Pacific Railroad".
In 1929 Foster illustrated the first newspaper adaptation of "Tarzan of the Apes" by Edgar Rice Burroughs. The comic strip was the first of its kind and it was Foster's sense of realism, composition, draftsmanship, and understanding of fluid anatomy that would forever mark him as "The Father of the Adventure Strip". The famous newspaper tycoon, William Randolph Hearst, wanted Foster and made the artist an un...