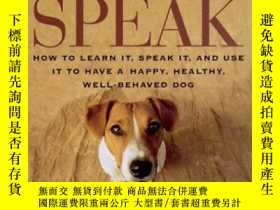 Description "Sit!" (Huh?) "Come!" (What?) "Get off the @#! sofa!" (Duh...) Are you and your dog suffering from a failure to communicate? Whether trying to command obedience, control a destructive habit, or teach simple good manners, all dog owners know the frustration of trying to communicate with man's best friend. DogSpeak will help every dog owner to become the undisputed Alpha leader of the pack by using the revolutionary DogSpeak technique to train dogs in their own language. It's the same revolutionary technique that has made Bash Dibra the most sought-after dog trainer in the world today and Dibra-trained dogs celebrities in their own right. In DogSpeak, Bash shares with average dog owners the $300-an-hour secrets he offers famous clients such as Henry Kissinger, Matthew Broderick, and Sarah Jessica Parker. Drawing on his uncanny ability to think like a dog, Bash shows the reader how to transform the most intractable canine into a well-behaved, happy pet. Using the genetic language of dog's ancestor, the wolf, Bash explains the Eight Central Factors of Pack Behavior, those hard-wired instincts that control every dog's behavior, from dominance and aggression to chase behavior, socialization, and vocalization. Working from an understanding of the wolf/dog heritage, Bash teaches dog owners how to interpret the clear and unmistakable signals that make up the basic grammar of DogSpeak, the language every dog understands, including: Facial Expressions -- Facial expressions clearly convey a dog's emotions, state of health, and intentions. Bash shows you how to interpret canine facial expressions, from the narrowing of the eyes to the wrinkling of the muzzle, to know exactly what your dog is telling you and what unwanted tricks he may be about to try! Body Language -- Used as eloquently among dogs as by humans. Bash guides the reader to a complete understanding of the body stances and tail positions that state, "I'm top dog around here, don't mess with me!" or "I'm feeling low today," or "I'm ready for a run," and shows how to use that information to ward off aggression, correct bad habits, prevent potential illness, or simply develop a closer relationship with a pet. Vocalization -- Bash shows why dogs bark and when, and explains how each and every bark has its own clear meaning, from a deep-throated warning growl to the yip that says, "Let's play!" and how to prevent the unwanted barking that makes a pet a problem. From basic training to graduation, Bash offers foolproof advice on selecting a dog, housebreaking a puppy, choosing a veterinarian, providing a proper diet, avoiding unwanted chewing and barking -- even introducing a new baby to an "only dog." Filled with Bash's inimitable warmth and humor as well as fascinating facts about man's best friend, DogSpeak turns dog-training into a game that owner and dog alike will enjoy.