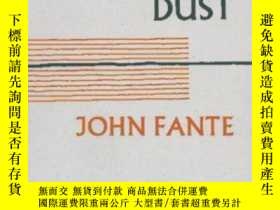 Fiction. John Fante was born in Colorado in 1909 and began writing in 1929. He published numerous short stories, novels and screenplays in the following decades. ASK THE DUST, a coming-of-age novel set in Los Angeles, was first published in 1939. Says Charles Bukowski, in the preface to ASK THE DUST, of his first encounter with Fante's work, "Then one day I pulled a book down and opened it, and there it was. I stood for a moment, reading. Then like a man who had found gold in the city dump, I carried the book to a table. The lines rolled easily across the page, there was a flow. Each line had its own energy and was followed by another like it. The very substance of each line gave the page a form, a feeling of something carved into it. And here, at last, was a man who was not afraid of emotion. The humour and the pain were intermixed with a superb simplicity ... that book was a wild and enormous miracle to me." John Fante died in 1983.