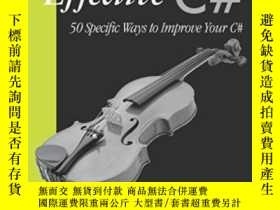 "This book really demonstrates Bills strengths as a writer and programmer. In a very short amount of time, he is able to present an issue, fix it and conclude it; each chapter is tight, succinct, and to the point." -Josh Holmes, Independent Contractor "The book provides a good introduction to the C# language elements from a pragmatic point of view, identifying best practices along the way, and following a clear and logical progression from the basic syntax to creating components to improving your code writing skills. Since each topic is covered in short entries, it is very easy to read and youll quickly realize the benefits of the book." -Tomas Restrepo, Microsoft MVP "The book covers the basics well, especially with respect to the decisions needed when deriving classes from System.Object. It is easy to read with examples that are clear, concise and solid. I think it will bring good value to most readers." -Rob Steel, Central Region Integration COE & Lead Architect, Microsoft "Effective C# provides the C# developer with the tools they need to rapidly grow their experience in Visual C# 2003 while also providing insight into the many improvements to the language that will be hitting a desktop near you in the form of Visual C# 2005." -Doug Holland, Precision Objects "Part of the point of the .NET Framework-and the C# Language, in particular-is to let the developer focus solving customer problems and deliver product, rather than spending hours (or even weeks) writing plumbing code. Bill Wagners Effective C#, not only shows you whats going on behind the scenes, but shows you how to take advantage of particular C# code constructs. Written in a dispassionate style that focuses on the facts-and just the facts-of writing effective C# code, Wagners book drills down into practices that will let you write C# applications and components that are easier to maintain as well as faster to run. Im recommending Effective C# to all students of my .NET BootCamp and other C#-r...