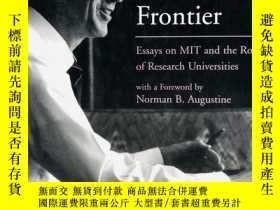 代購商品
The former president of MIT discusses challenges and policy issues confronting academia, science and technology, and the world at large.
In his fourteen years as president of MIT, Charles Vest worked continuously to realize his vision of rebuilding America's trust in science and technology. In a time when the federal government dramatically reduced its funding of academic research programs and industry shifted its R&D resources into the short-term product-development process, Vest called for new partnerships with business and government. He called for universities to meet the intellectual challenges posed by the innovation-driven, globally connected needs of industry even as he reaffirmed basic academic values and the continuing need for longer-term scientific inquiry.
In Pursuing the Endless Frontier, Vest addresses these and other issues in a series of essays written during his tenure as president of MIT. He discusses the research university's need to shift to a broader, more international outlook, the value of diversity in the academic community, the greater leadership role for faculty outside the classroom, and the boundless opportunity of new scientific and technological developments even when coupled with financial constraints. In the provocative essay "What We Don't Know," Vest reminds us of what he calls "the most critical point of all," that science is driven by a deep human need to understand nature, to answer the "big questions" ―that what we don't know is more important than what we do. In another essay, on the future of MIT, he celebrates MIT's strengths as being extraordinarily well-suited to the needs of an era of unprecedented change in science and technology. In "Disturbing the Educational Universe: Universities in the Digital Age Dinosaurs or Prometheans," he describes MIT's innovative Open Courseware initiative, which builds on the fundamental nature of the Internet as an enabling and liberating technology.
Vest, who is stepping down from MIT's presidency in the fall of 2004, writes with clarity and insight about the issues facing academic institutions in the twenty-first century. His essays in Pursuing the Endless Frontier offer inspiration to educators and researchers seeking the way forward.