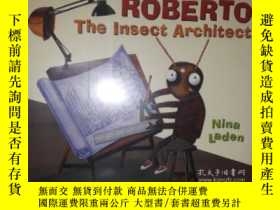 代購商品
本店書籍保證正品, 亦有其他品相的書籍，若沒有在列表中，可聯繫客服上架。書籍從國外郵寄回來，手續繁瑣，國外開始郵寄後，不支持退貨，小本生意，謝謝體諒！物流需要2-6周左右。
Ever since he was a wee mite (a termite, that is), Roberto has wanted to be an architect. Discouraged by his wood-eating family and friends, he decides to follow his dream to the big, bug city. There he meets a slew of not-so-creepy, crawly characters who spark in him the courage to build a community for them all. With stunning collage illustrations and witty text, the creator of the bestselling The Night I Followed the Dog, Private I. Guana, and When Pigasso Met Mootisse brings to life a funny and inspirational story that will encourage readers of any age to build their dreams. Review: "Even when Roberto was little, he went against the grain. Like most termites, he melted over maple, and pined for pine. Oak was okay, too. But Roberto didn't eat his food. He played with it." Young Roberto has a burning desire to become an architect. Even when the other termites mock his ambition, Roberto is never derailed from his dream. So, like so many career-minded youth, this mite with a mission sets off for the big, buggy city. Here, sadly, he is thwarted by his heroes, Hank Floyd Mite and Fleas Van Der Rohe. But this inspired insect decides not to wallow in his sorrows but to help out other bugs with even greater problems. Soon, a fantastic, eclectic housing development is in the works. The mysterious architect chooses to remain anonymous, but ultimately can't avoid the grateful adulation of the carpenter ants, ladybugs, and house flies he has helped. Nina Laden's fantastic collages use old catalog and magazine images, blueprints, cork veneer, and lots more, to create buildings, cities, and buggy creatures the likes of which you've never seen. The Leaning Tower of Pisa tilts away from the Empire State Building, with Gaudi's quirky sculptural edifices looming nearby. Some of the hilarious wordplay may fly over the heads of non-architects, but the overall humorous effect--and the go-for-your-goals message--will not be lost on anyone. For more charming and artistic pun-ishment, try Laden's When Pigasso Met Mootisse. (Ages 6 to 11) --Emilie Coulter "About this title" may belong to another edition of this title.