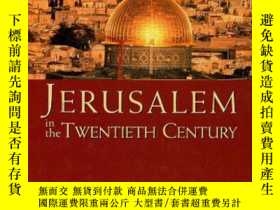 代購商品
本店書籍保證正品, 亦有其他品相的書籍，若沒有在列表中，可聯繫客服上架。書籍從國外郵寄回來，手續繁瑣，國外開始郵寄後，不支持退貨，小本生意，謝謝體諒！物流需要2-6周左右。
"The twentieth century has often been a bloody one for Jerusalem. But it has also been a century of creativity and satisfaction, exuberant life, determination, civic achievement, and perpetual hope." —from Jerusalem in the Twentieth Century Jerusalem today is a vibrant, flourishing city, the capital of an independent nation, and the vital center of worship for three world religions. Yet, one hundred years ago—a mere moment in time to a city celebrating its 3,000th anniversary—Jerusalem was a provincial town, an outpost of the Ottoman Empire ruled from Constantinople. The extraordinary transformation of Jerusalem, from the twilight of Turkish rule to the advent of the twenty-first century, is an epic struggle of passionate political, cultural, and spiritual forces. Often tragic, always fascinating, the remarkable history of contemporary Jerusalem is essential to our understanding of the Middle East. The story of modern Jerusalem is unparalleled in its dramatic juxtaposition of growth and prosperity with unyielding, bitter, and violent strife. It is a city, in the words of author Martin Gilbert, "cursed, even amid its great social, religious, and cultural renaissance, by recurring conflict." The Balfour Declaration of 1917, with its promise of a Jewish National Home, ushered in an era of rapid expansion in self-governing institutions, particularly in the areas of health and education. Yet, the seeds of disagreement were sown when, even though Jerusalem's majority population had been Jewish since the mid-nineteenth century, the British appointed an Arab as mayor. The hard-fought Battle of Jerusalem in 1948 and the victorious creation of the State of Israel were followed by the devastating division of the city—until the Six-Day War of 1967 stunned the world and brought about an uneasy reunification. In 1994, the triumphant signing of the Israel-Jordan peace treaty ended forty-six years of hostility. However, uncertainty remains as, today, the tentative hope of the peace accords, punctuated by the harshness of Intifada, seems more fragile than ever in the wake of the assassination of Prime Minister Yitzhak Rabin, and the election of Benjamin Netanyahu. Covering every facet of the legendary city's life—political, cultural, architectural, intellectual, religious, and social—Jerusalem in the Twentieth Century is history at its most lucid and compelling. And who better than Martin Gilbert to encompass the full scope and meaning of this protean city in a dynamic era? Here, the distinguished historian and acclaimed author of Jerusalem: Rebirth of a City has created a vivid, authoritative work, rooted in contemporary sources and scholarship, and drawing equally on his own vast, intimate knowledge of the city and its people. Acclaim for Martin Gilbert's earlier work Jerusalem: Rebirth of a City "Mr. Gilbert has written a lively book, full of excellent quotations—roundly outspoken and often eloquent." —John Gross The New York Times "His mastery of the source material and his artful use of these materials produce a riveting, charming, and moving account—proving that Mr. Gilbert is not only a first-rate historian but a good storyteller." —The Washington Times "Mr. Gilbert's scholarship is impeccable." —Colin Thubron Sunday Telegraph (London) Review: Renowned historian Martin Gilbert offers a history of Jerusalem in the 20th century through the eyewitness accounts of those who lived through it. Through documented accounts in letters, books and journals he follows the development of the city from a neglected Ottoman backwater, through the British mandate to the declaration of the state of Israel and the ensuing war in 1948, and on to the travails of the modern state which made Jerusalem its capital and created a modern city alongside the ancient one. Some of the most dramatic testimony concerns the division of the city in the 1948 war, and its reunification in the 1967 Six-Day war. Full of anecdotes that put history on a human level, the book includes the assassination of Yitzhak Rabin and the bus bombings of 1996. "About this title" may belong to another edition of this title.