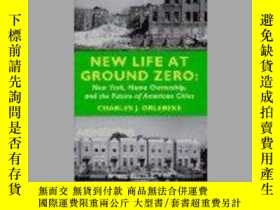 代購商品
本店書籍保證正品, 亦有其他品相的書籍，若沒有在列表中，可聯繫客服上架。書籍從國外郵寄回來，手續繁瑣，國外開始郵寄後，不支持退貨，小本生意，謝謝體諒！物流需要2-6周左右。
Presents a lively in-depth look at the efforts and struggles of the New York City Housing Partnership to build moderate and middle-income housing in New York City. Not long ago, the South Bronx and other devastated New York City neighborhoods had become legendary as the worst urban war zones, so infamous that busloads of foreign tourists would ask to be taken there to snap pictures of the rubble. What's more, the city's treasury was empty, and the federal government under Ronald Reagan was pulling back from its commitment to confront the nation's “urban crisis.” In New Life at Ground Zero, Charles J. Orlebeke traces New York City's dramatic comeback in the '80s and '90s, focusing on one organization, the New York City Housing Partnership, which helped spark the recovery by building thousands of new homes for the ownership market in the South Bronx and throughout the city. As Orlebeke vividly recounts, this high stakes gamble was pulled off by a diverse cast of characters―sometimes working cooperatively, more often at odds in the nation's most complex and contentious political environment. Behind the facade of “public-private partnership” presented by retired banker and civic leader David Rockefeller and popular mayor Ed Koch in 1982, lay minefields of conflicting interests, bureaucratic roadblocks, and clashing personalities. New Life at Ground Zero sets the stage for the emergence of the Housing Partnership with account of colliding views about how New York City should develop after World War II, whether as a gleaming “city of the future,” or as the messier, human-scale city of neighborhoods envisioned by Jane Jacobs. Both views seemed irrelevant in the mid-'70s, as New York City plunged into near bankruptcy. From this civic ordeal would emerge the Housing Partnership, a business-led nonprofit developer that would combine large-scale rebuilding with relatively low-density neighborhoods of resident owners. In telling the Housing Partnership story, Orlebeke draws on a careful analysis of internal documents and communications and on interviews with key partners, including city officials, Partnership staff, community activists, business leaders, homebuilders, and buyers. Still flourishing today, the Partnership has branched out into rebuilding abandoned rental buildings with neighborhood entrepreneurs, and is also sponsoring the development of new retail stores in places once written off as hopeless. As such, it stands out as a useful model of community revival for other cities to study and adapt to their own local circumstances. Reflecting on the Housing Partnership achievement, the author taps into his experience as a public official and a student of urban policy and argues persuasively that this story is an early example of an increasingly potent, national community development movement that challenges the conventional pessimistic view of the urban prospect. From the Publisher: Rockefeller Institute Press Publication, photographs "About this title" may belong to another edition of this title.