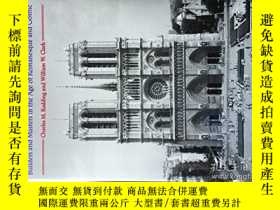 代購商品
本店書籍保證正品, 亦有其他品相的書籍，若沒有在列表中，可聯繫客服上架。書籍從國外郵寄回來，手續繁瑣，國外開始郵寄後，不支持退貨，小本生意，謝謝體諒！物流需要2-6周左右。
The eleventh and twelfth centuries witnessed a thoroughgoing transformation of European culture, as new ways of thinking revitalized every aspect of human endeavor, from architecture and the visual arts to history, philosophy, theology, and even law. In this book Charles M. Radding and William W. Clark offer fresh perspectives on changes in architecture and learning at three moments in time. Unlike previous studies, including Erwin Panofsky's classic essay Gothic Architecture and Scholasticism, Radding and Clark's book not only compares buildings and treatises but argues that the ways of thinking and the ways of solving problems were analogous. The authors trace the professional contexts and creative activities of builders and masters from the creation of the Romanesque to the achievements of the Gothic and, in the process, establish new criteria for defining each. During the eleventh and early twelfth centuries, they argue, both intellectual treatises and Romanesque architecture reveal a growing mastery of a body of relevant expertise and the expanding techniques by which that knowledge could be applied to problems of reasoning and building. In the twelfth century, new intellectual directions, set by such specialists as Peter Abelard and the second master builder working at Saint-Denis, began to shape new systems of thinking based on a coherent view of the world. By the thirteenth century these became the standards by which all practitioners of a discipline were measured. The great ages of scholastic learning and of Gothic architecture are some of the results of this experimentation. At each stage Radding and Clark take the reader into the workshops and centers of study to examine the methods used by builders and masters to create the artistic and intellectual works for which the Middle Ages are justly famous. Handsomely illustrated and clearly written, this book will be of great interest to scholars and students of medieval art, culture, philosophy, history, intellectual history, and the history of technology. "About this title" may belong to another edition of this title.