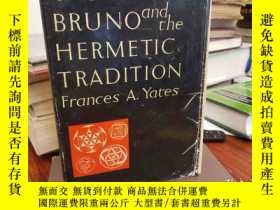 二手書博民逛書店Giordano罕見Bruno and the Hermetic TraditionY94537 Yates, Frances A. University of Chicago Press 出版1964

代購商品
Dame Frances Amelia Yates DBE FBA (28 November 1899 – 29 September 1981) was an English historian who focused on the study of the Renaissance. In an academic capacity, she taught at the Warburg Institute of the University of London for many years, and also wrote a number of seminal books on the subject of esoteric history.

Yates was born to a middle-class family in Portsmouth, and was largely self-educated, before attaining a BA and MA in French at the University College, London. She began to publish her research in scholarly journals and academic books, focusing on 16th century theatre and the life of John Florio. In 1941, she was employed by the Warburg Institute, and began to work on what she termed Warburgian history , emphasising a pan-European and inter-disciplinary approach to historiography.[citation needed]

In 1964 she published Giordano Bruno and the Hermetic Tradition, an examination of Bruno, which came to be seen as her most significant publication. In this book, she emphasised the role of Hermeticism in Bruno\'s works, and the role that magic and mysticism played in Renaissance thinking. She wrote extensively on the occult or Neoplatonic philosophies of the Renaissance. Her books Giordano Bruno and the Hermetic Tradition (1964), The Art of Memory (1966), and The Rosicrucian Enlightenment (1972) are major works. She dealt with traditions whose remoteness she could not eliminate, even while she made them more understandable.