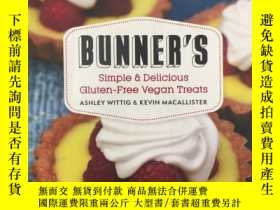 代購商品
Just a few years ago, the idea that a gluten-free, vegan bakery could be voted best dessert shop in Toronto might have been shocking. But in three short years, Bunner's Bake Shop has taken Toronto by storm with their delectable takes on traditional bakery favourites made with non-traditional ingredients.

Ashley Wittig had been a lifelong baker before she went vegan in 2008, and she was determined that dropping eggs and butter wasn't going to keep her from enjoying her much loved, home-baked treats. So she stationed herself in her kitchen to recreate her favourite cookies, muffins and cupcakes without skimping on taste or texture, all while skipping gluten, dairy, egg and soy. She experimented and tested until each recipe was perfect-the cookies were chewy, the muffins perfectly moist and tender and the cupcakes light as air. Together with her partner, Kevin MacAllister, they started selling her treats at farmers' markets on the weekend. The reaction was so positive that they quickly decided to open a full-time bakery dedicated to this unserved niche, and Bunner's Bake Shop was born.

With numerous awards under their apron ties, Bunner's is ready to share their delicious recipes with the whole country. Now anyone, anywhere can bake their signature cinnamon buns, frost up a delicious French toast cupcake, slice into a pumpkin cheesecake or serve up an "I-Can't-Believe-It's-Gluten-Free Pizza Crust." With Bunner's Bake Shop, you don't have to apologize for gluten-free and vegan baking-you can stand tall and even show off a bit as you enjoy and share these delectable treats perfect for everyone and every occasion.