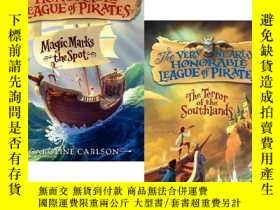 BOOK 1.Magic Marks the Spot
Admiral Westfield sucked in his breath and released it in a tremendous gust. "My dear," he said, "let me be clear: You are a young lady. You will not tell silly tales and you will never be a pirate." Hilary Westfield has always dreamed of being a pirate. She can tread water for 37 minutes. She can tie a knot faster than a fleet of sailors. She particularly enjoys defying authority, and she already owns a rather pointy sword. There's only one problem: The Very Nearly Honorable League of Pirates refuses to let any girl join their ranks of scourges and scallywags.

Girls belong at Miss Pimm's Finishing School for Delicate Ladies, learning to waltz, faint, and curtsy. But Hilary and her dearest friend, the gargoyle, have no use for such frivolous lessons - they are pirates! (Or very nearly.) To escape from a life of petticoats and politeness, Hilary answers a curious advertisement for a pirate crew and suddenly finds herself swept up in a seafaring adventure that may or may not involve a map without an X, a magical treasure that likely doesn't exist, a rogue governess who insists on propriety, a crew of misfit scallywags, and the most treacherous - and unexpected - villain on the High Seas.

BOOK 2.The Terror of the Southlands
"Tell me, Pirate Westfield: When was the last time you drew your sword against an enemy? Or stole a stash of loot from a fellow buccaneer? When was the last time you sailed off on a thrilling High Seas adventure?" Hilary Westfield is a pirate. In fact, she's the Terror of the Southlands! She's daring, brave, fearless, and...in a rut. Maybe she hasn't found any treasure lately. And maybe she isn't fighting off as many scallywags as she'd like. But does that mean she and her loyal crew (including a magical gargoyle) deserve to be kicked out of the ranks of the Very Nearly Honorable League of Pirates?

There is only one thing to do - find a daring mission worthy of her fearless reputation. With the help of first mate Charlie, finishing-school friend Claire, and the self-proclaimed intrepid gargoyle, Hilary sets sail on a swashbuckling expedition that may or may not involve a kidnapped Enchantress, bumbling inspectors, a mysterious group called the Mutineers, and - the most terrifying thing of all - a High Society ball. Caroline Carlson brings just as much rollicking fun, laughter, and action to this second book of the Very Nearly Honorable League of Pirates as she did with the first, Magic Marks the Spot.

作者介紹：
Caroline Carlson is the author of The Very Nearly Honorable League of Pirates, a funny and fantastical series of novels for young readers. Her first book, Magic Marks the Spot, was a New York Times Editor’s Choice, an American Booksellers Association Best Book for Children, and a Junior Library Guild selection.Caroline holds a BA from Swarthmore College and an MFA in Writing for Children from Vermont College of Fine Arts. A Massachusetts native, she now lives in Pittsburgh with her husband.