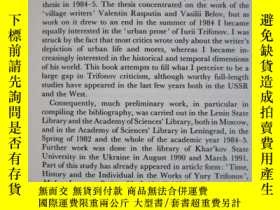 代購商品
本書原定價52.00美 ，淨重400克，館藏。【圖書分類：俄羅斯小說的評論和研究】Iurii Trifonov (1925–81) has recently become well known in the West as a writer of Soviet urban life. This study concentrates on his exploration of major events in Russian history (such as the assassination of Tsar Alexander II and the Russian Civil War) and their implications and consequences for his time. David Gillespie traces this interest through all of Trifonov\'s writings, from his earliest, Stalin prize-winning period to the self-consciously modernist later works, in which Trifonov emphasizes the interconnectedness of human life and history, with the individual as \'the nerve\' of history; linking epochs, places, civilizations. Trifonov discerns patterns and analogies in history, and develops a language of hints and allusions with which to combat the repressive censorship of his time.

• Trifonov has generated a lot of interest among Western scholars recently - three general studies of him have appeared in the last two or three years • He was one of the few writers to survive the Stalin years and their aftermath and yet able to avoid compromising his ideals • This book focuses on his great interest in Russian history, tracing it through all his works

David Gillespie\'s recent book Iurii Trifonov: Unity through Time is an ambitious and illuminating work....I think readers will appreciate its clear, elegant style which, because of a lack of jargon, will impress both general readers and scholars of Russian literature. Tatyana Novikov, South Atlantic Review

Iurii Trifonov: Unity Through Time will certainly be essential reading for anyone engaged in serious examination of Trifonov. World Literature Today

Gillespie\'s study of time in Trifonov (\'unity through time\') is well written, and his analysis of each major work convincing. His vantage point permits his work to complement favorably other existing monographs on the author, most notably Yuri Trifonov\'s The Moscow Cycle by Colin Partridge and Invented Truth by Josephine Woll. As such, David Gillespie\'s Iurii Trifonov is a welcome contribution to Western scholarship on postwar Soviet letters. Joseph P. Mozur, Jr., Russian Review

...a balanced assessment of one of the most widely read representatives of post-Stalinist gosizdat....[Gillespie] makes commendable progress toward a unified interpretation of the writer\'s oeuvre. Rolf Hellebust, Canadian Slavonic Papers

This is the fourth book-length study of Trifonov in English and, doubtless, the most comprehensive, incisive, and cohesive, not only for specialists, but also for a general audience. Gillespie demonstrates solid knowledge of the historical and cultural context and much insight into Trifonov and his time. Sigrid McLaughlin, Slavic and East European Journal