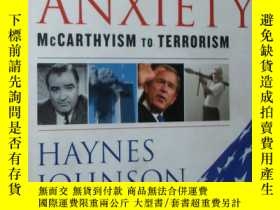 In The Age of Anxiety, now updated with a new afterword, Johnson tells this monumental story through the lens of its relevance to our own time, when the current administra­tion has created a culture of fear that again affects American behavior and attitudes. He believes now, as then, that our civil liberties, our Constitution, and our nation are at stake as we confront the ever more difficult task of balancing the need for national security with that of personal liberty.
From Publishers Weekly
Starred Review. Pulitzer-winning journalist Johnson (The Best of Times) offers an engrossing account of the career of red-baiting demagogue Joseph McCarthy and a chilling description of his legacy for today. The focus is on the disturbing questions raised by McCarthyism: how could a little-known freshman senator, driven by Cold War paranoia, quickly amass the power to intimidate senior colleagues, bully the media, terrorize innocent citizens and even threaten two respected presidents? Why did fellow Republicans not reject his sleazy, dishonest tactics when they were personally revolted by them? Most urgently, are we seeing the birth of a new "age of anxiety," in which terrorism replaces communism as the bogeyman? Johnson's answer is clearly yes. He traces the current climate in Washington directly to the 1950s: "McCarthyism was a major factor in the rise of the radical Right and the polarization that plagues American life, pitting group against group and region against region, sowing cynicism and distrust, and manipulating public opinion through fear and smear." He reviews recent events, including the use of the Patriot Act to stifle dissent, the abuse and detention of thousands of American Muslims guilty of no crime, and politicians' readiness to impugn the patriotism of opponents without evidence. Johnson's own critique is not ideological; rather, his most important argument may be that ideological polarization continues to prevent us from rationally assessing and dealing with real threats. 8 pages of b&w photos not seen by PW.
Copyright ? Reed Business Information, a division of Reed Elsevier Inc. All rights reserved. --This text refers to an out of print or unavailable edition of this title.
From Booklist
Free, democratic societies constantly strive for a balance between individual freedom and the necessity for government to protect both personal and national security. When these societies feel particularly vulnerable to both internal and external threats, the resultant "anxiety" can throw the balance out of whack. Pulitzer Prize-winning journalist Johnson recounts the most notorious such period in our recent past, the five years in the 1950s during which Senator Joseph McCarthy and anti-Communist "hysteria" reigned supreme. Johnson's narrative is succinct and well written, although he doesn't cover any new ground. Still, it is valuable to hear the story told again. Johnson eloquently illustrates McCarthy's cynicism, outright cruelty, and dishonesty. The cowardice of political figures who should have stood up to him is revolting, and the bravery of those who opposed him is inspiring. Johnson overreaches when he ties the McCarthy era to our current efforts to protect domestic security after 9/11. Although he does effectively indicate some potential dangers inherent in the Patriot Act, his suggestion that we are in store for a suppression of civil liberties is not easy to substantiate. Jay Freeman