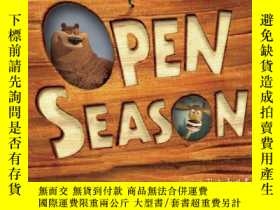 代購商品
本店書籍保證正品, 亦有其他品相的書籍，若沒有在列表中，可聯繫客服上架。書籍從國外郵寄回來，手續繁瑣，國外開始郵寄後，不支持退貨，小本生意，謝謝體諒！物流需要2-6周左右。
In the new action-adventure comedy Open Season, the first feature-length CG animated film from Sony Pictures Animation, a happily domesticated grizzly bear (Martin Lawrence) has his perfect world turned upside-down after he meets a scrawny, fast-talking mule deer (Ashton Kutcher). Open Season also features Debra Messing, Gary Sinise, Jon Favreau, and Billy Connolly (as head of a rogue gang of Scottish squirrels). Open Season is directed by Roger Allers (The Lion King) and Jill Culton (credits include Monsters, Inc., Toy Story 2) and co-directed by Anthony Stacchi (credits include Antz). The film showcases the Computer Generated (CG) animation created by Sony Pictures Imageworks Inc., an Academy Award®-winning, state-of-the-art visual effects and character animation company, dedicated to the art and artistry of digital production and character creation. Recognized by the Academy of Motion Picture Arts and Sciences, Imageworks has been nominated for its work on Spider-Man, Hollow Man, Stuart Little, and Starship Troopers. The Art of Open Season gives you an inside look at an explosion of color and talent, documenting every aspect of creating a CG animated film, from scripting and storyboarding to layout, animation, color, lighting, and visual effects with sensational full-color images throughout. About the Author: Linda Sunshine is a former editor at Stewart, Tabori & Chang, and the author of more than fifty books including twenty-six behind-the-scenes portraits of notable films, from E.T. and Stuart Little to Catch Me If You Can and Frida. She lives in New York and Los Angeles. Steve Moore, executive producer, created the comic panel In the Bleachers, while working at a sports editor at The Maui News in Hawaii. He then took a post at the Los Angeles Times, where after eleven years, he left to concentrate full-time on the comic strip and developing other projects. Open Season is his first animated feature film. In the Bleachers is distributed by Universal Press Syndicate. Steve and his family currently reside in Boise, Idaho. "About this title" may belong to another edition of this title.