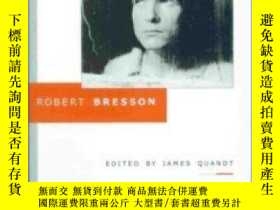 French master Robert Bresson is perhaps the most revered living film director. His body of work is small - thirteen features and one short film, made over five decades - but it has established him as one of the greatest artists of the twentieth century. Though Bressons subjects and sources range widely - his films are derived from Diderot, Dostoevsky, Bernanos, and Tolstoy, from the transcripts of the trial of Joan of Arc and the Arthurian legends - his severe style has remained constant. Awed, inspired, and sometimes mystified by the beauty and austere perfectionism of Bressons style, critics and directors have been moved to passionate debate about his unique ideas on the use of sound, actors, editing, and music. Despite, or perhaps because of, his rejection of the core tenets of traditional film-making, Bresson has exerted a profound influence on many directors, from the French New Wave (Godard, Malle, Rivette, Rohmer) to the current generation of American independents (Hartley, Jarmusch). Robert Bresson, designed to accompany a major retrospective of the directors films, is the first collection of essays in English on Bresson in three decades. A thorough examination of his vision and style, it draws together over twenty important articles by leading critics and scholars, including classic works by Susan Sontag and Andre Bazin. Several essays, including those by Roland Barthes and Alberto Moravia, have been translated into English for the first time, and many pieces have been written especially for this volume. Also included are three essential interviews with Bresson - by Jean-Luc Godard and Michel Delahaye; Paul Schrader; and Michel Ciment - and the illuminating testimony of L. H. Burel, the cinematographer of four of his greatest films. The final section of the book is dedicated to the views of over thirty directors on Bresson - from Bernardo Bertolucci and Atom Egoyan to Martin Scorsese and Aki Kaurismaki; taken together, these commentaries - by turns ...